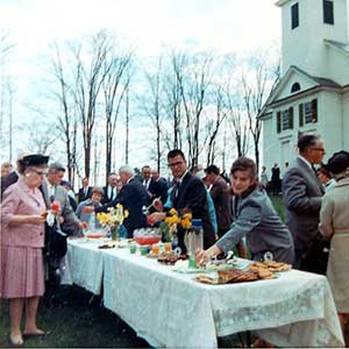 Alice & Richard Angney partake in Coffee Hour at the first joining ceremony in 1956
The Old Meeting House in East Montpelier Center, Vermont was built in 1823 in its current location, which was then the center of Montpelier. It is the oldest church building still standing in the Montpelier area.
The land on which the church stands was provided by Parley Davis for a town common. Mr. Davis attached the provision that if the town decided not to put its public offices there, the land would revert to him and his family. When the municipal offices were placed in what is now Montpelier City, Mr. Davis reclaimed the land but retained a portion for the Meeting House Common.

The first quarterly meeting of the Methodists in the area was held in 1820 in the Center Grove. In September 1822, a lease was signed allowing the town to erect a meeting house on the common with the provision that if a worship service were not held in the building at least once every five years, the land and all the buildings would revert to the Davis family. 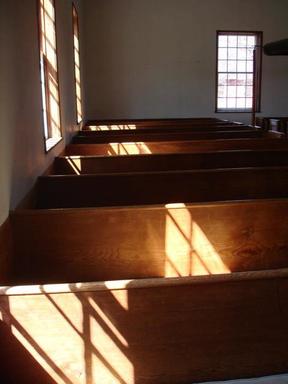 photo by Alex Brown
The timbers used for the Meeting House were cut from trees in the Center Grove, which subsequently became the site of the church. The frame of the building is firmly anchored with great chains to the ledge upon which it is built. The church is quite literally founded upon a rock.

In the original agreement, it was stated that the building "would measure 55 feet long and 43 feet wide with posts 16 feet long, having a lobby or entry eight feet deep and eight feet high extending the whole width of the house over which would be a gallery for singers and to have an altar and pulpit." And so it was built.
Membership in the church was non-denominational. Money was raised for the building of the church by the sale of pews. The going rate was $24 and if a family wanted to pick its own pew, there was an additional $4 charge. For their payment, many people contributed beef cattle, grain, cheese or fresh pork in lieu of cash.

The church preserves the same interior that it had when it was erected. The original plaster is on the walls, the unpainted pine box pews are fitted together with wooden pegs and hand hewn beams support the building.

Hand fashioned nails and great timbers went into the heavy construction. Two stoves between the pulpit and first row of pews were the sole providers of heat before 1970. Although a furnace was installed under the church at that time, the stoves are still used as primary sources of heat. 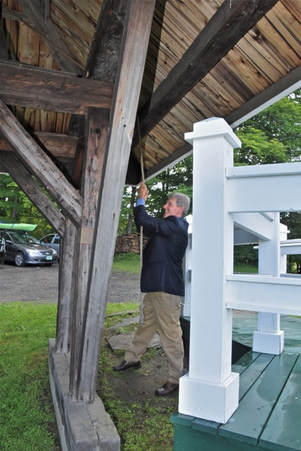 Charlie Waterman ringing the bell for worship
Town Meetings took place in the church until the late 1840's. The town then divided and three or four East Montpelier Town Meetings were held here each year until 1890. At the same time, worship services were held at the church about every other week. For many years during the winter, services were conducted at the nearby schoolhouse, which has now been converted into a dwelling. The church's Sunday School was organized in 1914 and classes were also held in the schoolhouse until the church bought the house next to the church in 1924. That structure has been used for Sunday School, committee meetings, community gatherings and chicken pie suppers. Several renovations have been made to the building, the largest of which was completed in 2001. The Parish House, as it is now called, retains the posts and beams of the original building in its central portion, and has new space added at each end.

An interesting feature of the Old Meeting House is the bell which had originally been used in the Universalist Church in North Montpelier. The bell was cast in 1855 and brought to its first church several years later, where it was in use until that church was torn down in 1954. The bell was then offered to the Old Meeting House where it was stored inside the entry. In 1966 the bell and a new clapper (because the original was lost) were moved to a belfry next to the church.

On September 12, 1965, after 91 years without a resident pastor, the Old Meeting House opened its doors for worship every Sunday. The church shared a minister with the Old Brick Church in East Montpelier Village until 1995 when the two churches voted to separate.

Since its reorganization in 1965, the church has been painted inside and out, the windows have been repaired, a furnace and lights added and the building has been insulated.

The Shelburne Museum has asked permission to move the church to the museum grounds, explaining that the directors consider it one of the finest examples of early Vermont architecture in the state. The request was politely refused, and the church continues to grow in the size of its congregation and place in the community.